Vehicles of the Year Advance to Semifinal Round in North American Car, Utility and Truck Awards

The race for the “Oscars of the Auto Industry” tightens

DETROIT, Mich., September 15, 2017… The next steps on the road to the bragging rights as the best the automotive industry has to offer customers were announced by the North American Car, Utility and Truck of the Year committee today. The awards are the most sought-after and respected honors bestowed upon auto manufacturers as an unbiased jury of 60 expert print and broadcast journalists combine centuries of discerning experience to determine the winners.

“This is where it gets quite serious,” said Mark Phelan, president of the jury. “These are the vehicles that will be driven a second time by jurors in a three-day back-to-back comparison held in October. While our jurors have attended launch programs for each of these vehicles, this event affords them a refresher and the ability to make direct and side-by-side evaluations. It’s pretty serious as all of our jurors know how coveted these awards are by manufacturers.”

The awards, presented with the cooperation of Bridgestone Americas, are broken into three categories: Cars, utility vehicles and light- and medium-duty trucks. Over the 25-year history of the awards, the utility vehicle category was added due to the significant percentage of retail units purchased by consumers.

“It was only fair to expand to three groups,” said Lauren Fix, secretary-treasurer of the group. “Nearly two-thirds of retail sales are now in the SUV/CUV category so we adapted to the times.”

The next step will be the announcement of the finalists at the Automobility-Los Angeles Auto Show in November and the winners at the North American International Auto Show in January 2018.

About the North American Car, Utility and Truck Awards:

The North American Car, Utility and Truck of the Year awards honor excellence in innovation, design, safety, performance, technology, driver satisfaction and value.  Initiated in 1994, they are judged about 60 professional automotive journalists from the United States and Canada who work for magazines, television, radio, newspapers and web sites. They are the longest-running award not associated with a specific publication, a structure that produces a diverse base of jurors.

The award for Utility Vehicle of the Year was added in 2017 in recognition of the growing popularity of SUV-style vehicles. Passenger-oriented minivans are also eligible for Utility of the Year. Vehicles eligible for Truck of the Year include pickups of all sizes and light- and medium-duty commercial vans.

The 2017 Car, Truck and Utility Vehicle of the year will be announced Jan. 9 at the North American International Auto Show in Detroit.

The process of selecting the Car, Truck and Utility Vehicle of the year starts in June by identifying vehicles eligible for the awards. It includes three rounds of voting.

The voting for finalists and winners is tallied by Deloitte & Touche.

The finalists will be announced at Automobility L.A., the conference that precedes the Los Angeles Auto show. It continues with vehicle unveilings and press conferences at the Convention Center in downtown Los Angeles.

For more information, go to: https://www.northamericancaroftheyear.org

Nashville, Tennessee-based Bridgestone Americas, Inc. (BSAM) is the U.S. subsidiary of Bridgestone Corporation, the world’s largest tire and rubber company. BSAM and its subsidiaries develop, manufacture and market a wide range of Bridgestone, Firestone and associate brand tires to address the needs of a broad range of customers, including consumers, automotive and commercial vehicle original equipment manufacturers, and those in the agricultural, forestry and mining industries. The companies are also engaged in retreading operations throughout the Western Hemisphere and produce air springs, roofing materials and industrial fibers and textiles. The BSAM family of companies also operates the world’s largest chain of automotive tire and service centers. Guided by its One Team, One Planet message, the company is dedicated to achieving a positive environmental impact in all of the communities it calls home. 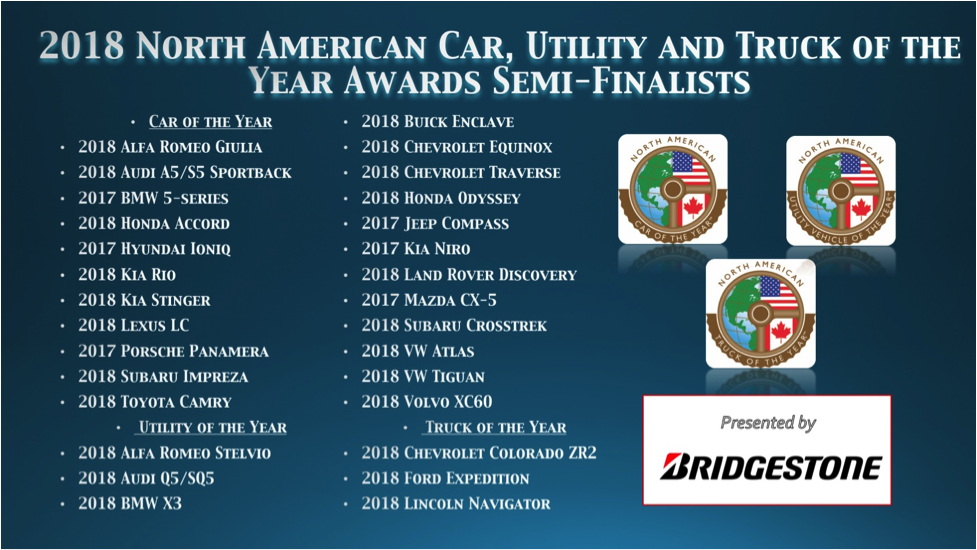