Countdown Towards 2020 Awards in January Continues 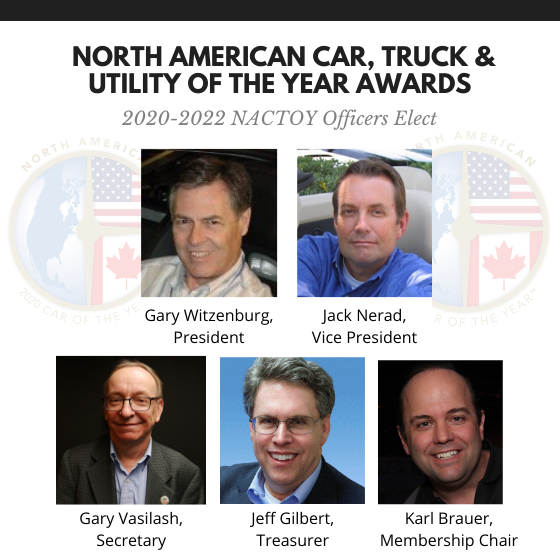 Detroit – December 16, 2019 – Five new officers have been elected to lead the North American Car, Utility and Truck of the Year Awards (NACTOY) jury over the next two years. The organization continues to be known for awarding the most coveted automotive prizes in the automotive industry.

Now in its 26th year, NACTOY is expanding its voluntary leadership team from three officers to five as part of a multi-pronged effort designed to keep pace with the increased needs of the organization.

The following officers were elected by a 50-person group of automotive journalists across North America who also serve as NACTOY jurors. The incoming officers, who will serve from 2020 to 2022, are:

“I am pleased with the progress this organization has made over the past two years and am confident that NACTOY will continue to thrive and grow under the stewardship of these talented, dedicated incoming officers,” said NACTOY President Lauren Fix. “All of the new officers are highly respected automotive journalists and are capable of leading NACTOY into the future.”

The new officers begin their terms on Jan. 14 – one day after NACTOY reveals its 2020 award winners.

The 2020 award event will begin at 8 a.m. on Jan. 13 in Detroit in the Atrium of TCF Center – the facility previously known as Cobo Center – as part of a morning that will celebrate and evaluate the automotive industry.

The program will begin with a preview of the 2020 North American International Auto Show that will be held in June from Executive Director Rod Alberts. The NACTOY award ceremony will begin shortly after 8 a.m. and will be followed by the 2020 Cox Automotive Industry Insights Breakfast.

NACTOY’S awards will be livestreamed here on the North American International Auto Show’s YouTube channel. Those who want to attend the event can register here.

The organization’s awards are independent and unique because instead of being given by a single publication, website, radio or television station, they are selected by a jury of automotive journalists representing dozens of media outlets in the United States and Canada.

Jurors evaluate the finalists based on segment leadership, innovation, design, safety, handling, driver satisfaction and value for the dollar. The process, which started in June, 2019 by determining a list of eligible vehicles, includes three rounds of voting.

Jurors voted to determine the finalists after gathering in Ann Arbor, Michigan in October to evaluate the semifinalist vehicles.

This year’s nine finalists are:

For more about NACTOY and its history: http://northamericancaroftheyear.org/

The NACTOY awards are intended to recognize the most outstanding new vehicles of the year. These vehicles are benchmarks in their segments based on factors including innovation, design, safety, handling, driver satisfaction and value for the dollar. The organization gives out three awards. They are: “North American Car of the Year,” “North American Utility of the Year,” and “North American Truck of the Year.” The awards are unique because — instead of being given by a single publication, website, radio or television station — they are given by an independent jury of automotive journalists from the United States and Canada.