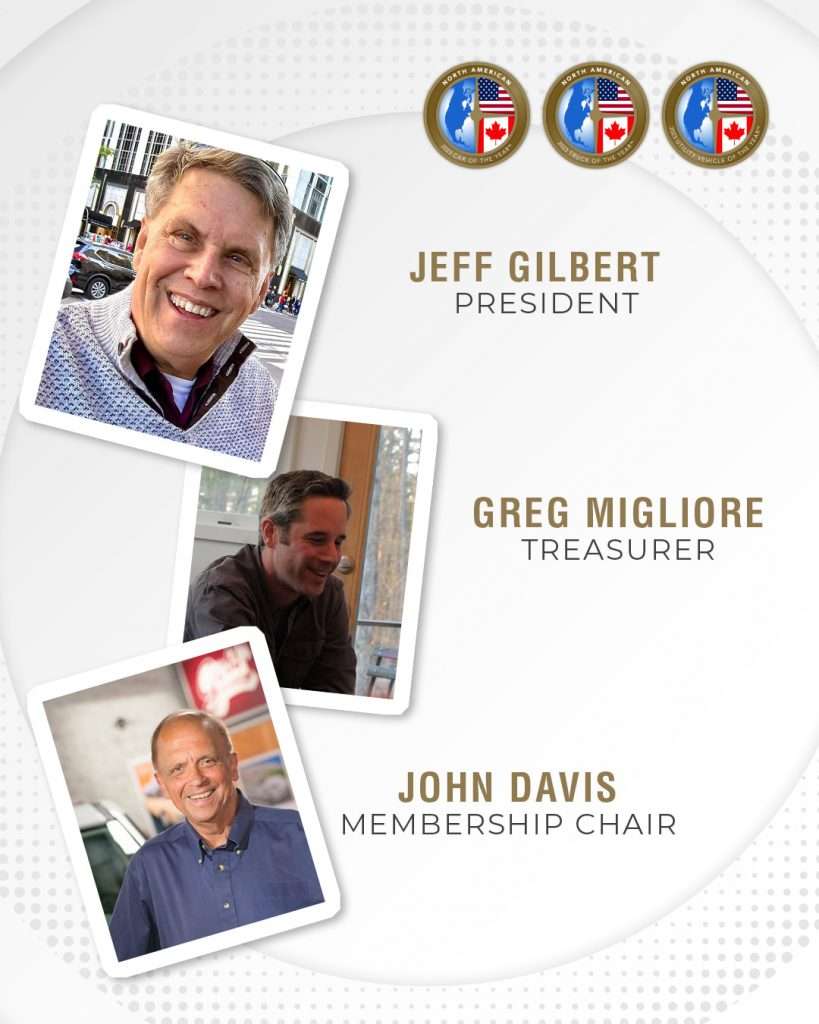 DETROIT, Mich., Jan. 9, 2023 – The new year brings new leadership for the team of 50 automotive journalists who serve as jurors for North American Car, Truck and Utility Vehicle of the Year™ (NACTOY). Following a November election by NACTOY jurors, CBS Radio Network and Detroit WWJ Auto Reporter Jeff Gilbert – who has served as NACTOY Treasurer for the past three years – will succeed Gary Witzenburg as president.

“Gary has done an outstanding job of putting this organization in a great position for success, following on the hard work of his predecessors,” said Gilbert. “My goal is to continue that momentum, as these awards remain among the most prestigious in honoring the best vehicles of a given year.”

Moving into Gilbert’s role as Treasurer will be Greg Migliore, who is Editor in Chief of Autoblog. Karl Brauer, Executive Analyst at iSeeCars.com, will be succeeded as Membership Chairman by John Davis, host of MotorWeek on PBS. Vice President Jack Nerad, host of the SportsMap Radio Network program “America on the Road,” will remain in his role, as will Secretary Nicole Wakelin, who contributes to Forbes, TrueCar and Newsweek’s Fast Women podcast.

“I am sincerely thankful to Jeff and Karl for three years of outstanding service in their respective positions, and especially to Jeff for stepping up to lead this fine organization,” Witzenburg said. “I have no doubt that he will do an outstanding job, as will Greg and John in their new officer roles.”

The new officers will assume their roles shortly after the 2023 awards are announced and presented on January 11, 2023, at a press conference at M1 Concourse in Pontiac, Mich. The press conference will be livestreamed on the NACTOY website and on YouTube.

Spanish and French versions of this release are available on NACTOY’s website. For more information about NACTOY and its history, visit http://northamericancaroftheyear.org.

The awards are intended to recognize the most outstanding new vehicles of the year. These vehicles are benchmarks in their segments based on factors including innovation, design, safety, handling, driver satisfaction, user experience and value. The organization gives out three awards. They are: “North American Car of the Year™,” “North American Truck of the Year™,” and the “North American Utility Vehicle of the Year™.” The awards are unique because they are given by an independent jury of automotive journalists from the United States and Canada instead of by a single publication, website, radio or television station.