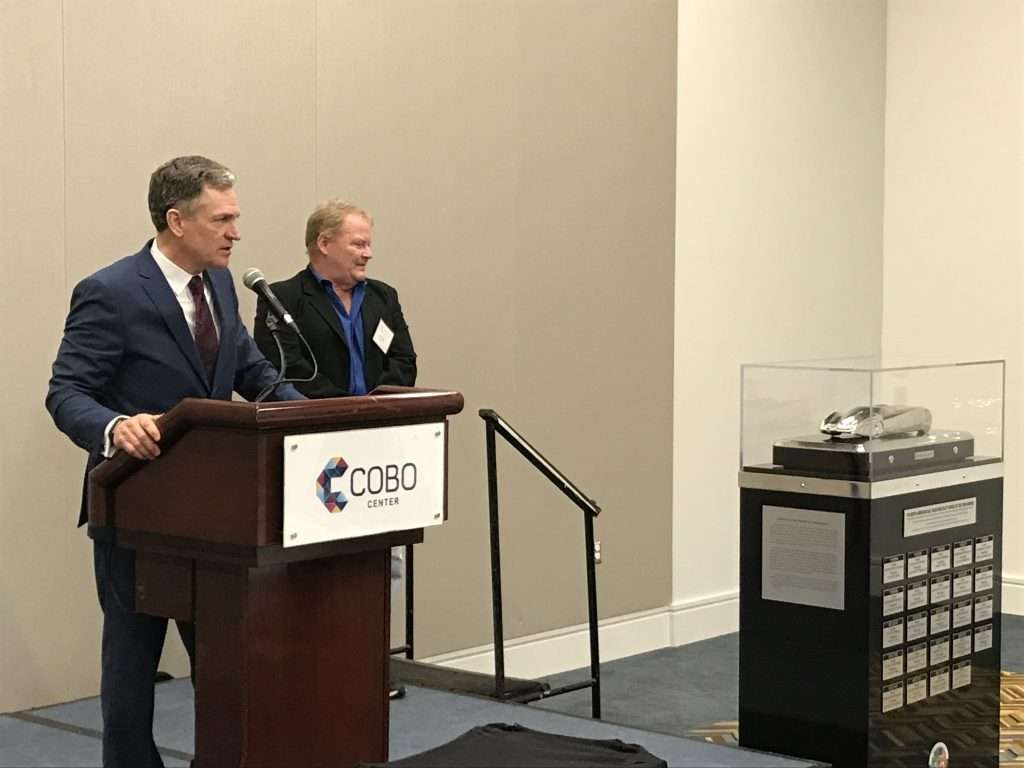 Designed by renowned car designer Ed Welburn, the striking 100-pound stainless steel replica of the award sits atop a black, granite stand that includes a small plaque for every award winner since the award’s inception. It will be will be on display in Cobo Center’s riverside atrium.

The decision by Cobo Center and the North American International Auto Show to work with the NACTOY jurors to find a permanent home for a replica of the award illustrates the strength of the deep partnerships between the three organizations and the prestige of the award.

The awards are broken into three categories: cars, utility vehicles and light and medium-duty trucks. Initiated in 1994, the winners are announced every year during NAIAS, which is held at Cobo Center.

Welburn, who served for many years as vice president of global design for General Motors, generously agreed in 2016 to design an all-new version of the award that was given out for the first time last year. Then, Welburn came up with another idea that led to today’s event.

“It was Ed Welburn who first suggested a larger version of the award should be created for the NACTOY organization. I immediately thought that was a great idea but had no idea where we could display it,” said Mark Phelan, president of NACTOY. “When Rod Alberts, executive director of the Detroit Auto Dealers Association, suggested a partnership with Cobo Center to serve as a home for the award, I thought nothing could be more perfect.”

“For years the jurors of the North American Car of the Year have picked the North American International Auto Show as the main event to announce the winners of their awards, and we wanted to demonstrate our gratitude to them for their loyalty by helping to make this happen,” Alberts said. “This display represents what happens when organizations work together and form deep partnerships.”

Judged by approximately 60 professional automotive journalists from North America that work for a variety of media organizations the awards are considered among the most prestigious by automotive manufacturers.

The process of selecting the car, utility and truck awards starts in June by identifying vehicles eligible for the awards. It includes three rounds of voting, and the finalists and winners are tallied by Deloitte & Touche.

Bridgestone Americas, Inc. is the presenting sponsor of the North American Car, Utility and Truck of the Year awards; Lambert Edwards & Associates is its agency of record; and the award is manufactured by American Arrow Corp. in Clawson.

Photos of the replica are available for download on Dropbox.

Nashville, Tennessee-based Bridgestone Americas, Inc. (BSAM) is the U.S. subsidiary of Bridgestone Corporation, the world’s largest tire and rubber company. BSAM and its subsidiaries develop, manufacture and market a wide range of Bridgestone, Firestone and associate brand tires to address the needs of a broad range of customers, including consumers, automotive and commercial vehicle original equipment manufacturers, and those in the agricultural, forestry and mining industries. The companies are also engaged in retreading operations throughout the Western Hemisphere and produce air springs, roofing materials and industrial fibers and textiles. The BSAM family of companies also operates the world’s largest chain of automotive tire and service centers. Guided by its One Team, One Planet message, the company is dedicated to achieving a positive environmental impact in all of the communities it calls home.

The awards are intended to recognize the most outstanding new vehicles of the year. These vehicles are benchmarks in their segments based on factors including innovation, design, safety, handling, driver satisfaction and value for the dollar. The organization gives out three awards. They are: The awards are the “North American Car of the Year” and “North American Truck/Utility of the Year,” not “Car of the Year” or “Truck of the Year.” The awards are unique because — instead of being given by a single publication, website, radio or television station — they are given by an independent jury of automotive journalists from the United States and Canada.

Brent Snavely, on behalf of NACTOY