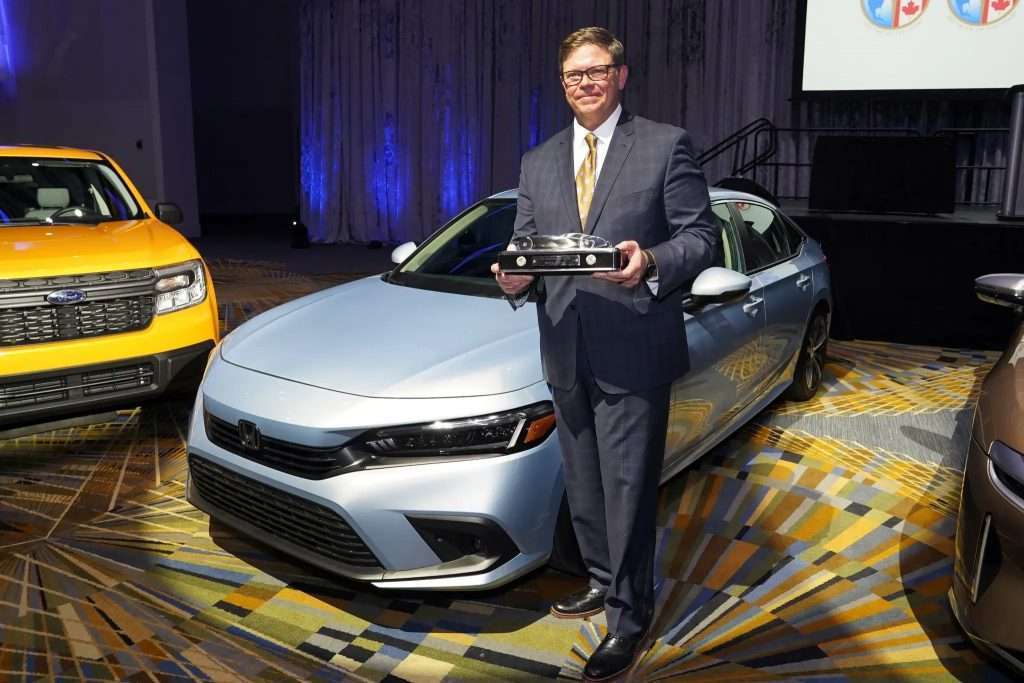 Car of the Year went to the re-designed 2022 Honda Civic, the 11th generation of a perennial favorite that has held its own against the increasing popularity of crossover sport utility vehicles.

The awards, which date back 28 years, are sponsored by the North American Car of the Year organization, composed of 50 automotive journalists from the United States and Canada. NACTOY bills itself as the longest-running independent vehicle competition — and the only one unaffiliated with any media outlet.

Journalist members of NACTOY (including this writer) must drive and evaluate all of the nominees for three rounds of voting. This year started with 36 nominated vehicles, which resulted in nine finalists—three in each category. The votes, tallied by Deloitte, an international financial services firm, are kept secret until the final announcement.

Winners were announced at the Huntington Place convention center in downtown Detroit, formerly named “TCF Center” and, before that, “Cobo Hall.” The event was co-sponsored by NACTOY and the Automotive Press Association, an organization of automotive journalists based in Detroit.

The 2022 Honda Civic is available as a four-door hatchback and a four-door sedan. Honda will introduce high-performance Si and Type R models later this year. In 2021, Honda Civic U.S. sales totaled 263,787, good for second place after the Toyota Corolla.

Other finalists for Car of the Year were the Lucid Air, an all-new, stunning and expensive 100% electric luxury sedan built in an Arizona factory by a new company based in California, and the Volkswagen GTI and R, high-performance versions of the VW Golf.

The Truck of the Year Ford Maverick is an all-new, entry-level small pickup truck slotting in below the Ford Ranger. It has a starting price of $21,490 with a hybrid power train, a 4.5-foot cargo bed, a payload of 1,500 pounds, and carries four passengers.

Other finalists for Truck of the Year were the Hyundai Santa Cruz, a stylish small pickup truck built like a crossover sport utility vehicle, but with a near $40,000 price tag fully equipped. The other is the Rivian R1T, an innovative full-size all-wheel drive electric pickup truck with four motors and 800 horsepower but a price tag that can easily exceed $70,000.

The Ford Bronco Utility of the Year is a resurrection of an earlier SUV and a challenge to off-road capable vehicles in the Jeep Wrangler and the Land Rover Defender category. It’s a big, brawny SUV that, in addition to a four-door version, comes in a utilitarian two-door with a seven-speed manual transmission.

The award likely does not apply to the Bronco Sport, a completely different compact crossover SUV with underpinnings similar to the award-winning Ford Maverick pickup truck.

Also-rans for Utility of the Year were the slick luxury Genesis GV70 crossover SUV and the futuristic electric Hyundai Ioniq 5, one of a cache of new fast-charging electrics from South Korea’s Hyundai and Kia. Genesis is Hyundai’s luxury brand.

Car of the Year: Honda Civic

Truck of the Year: Ford Maverick

Utility of the Year: Ford Bronco